As I sit in my office watching the early season snow storm that is hitting us in Minnesota, I can't help but think back to a five day stretch of fishing that I experienced only a couple of weeks ago. Late fall fishing is my favorite time of the year for one main reason: big bass, but when numbers happen too, well, that's what we call Bass Utopia! With water temps in the low fifties, and at times dipping into the forties, many people in the northern part of the country turn their focus from flipping jigs to setting stands and blinds.

For me, it's when things slow down. Tournaments are over, filming commitments are mostly done, and I can finally take a breath, slow down, and just relax on the boat. Don't get me wrong, I love the other stuff too, but it's always nice to slow things down and relax.

The mornings on the water during that stretch of days were cold, and the boat runs took the breath out of your lungs, but finding the fish made it all worth it. The lake we were targeting had very little weed growth, and what was there was in very skinny water. The bottom is hard, and there are scattered rocks mixed into the sand, but the real key was the structure on the depth changes. 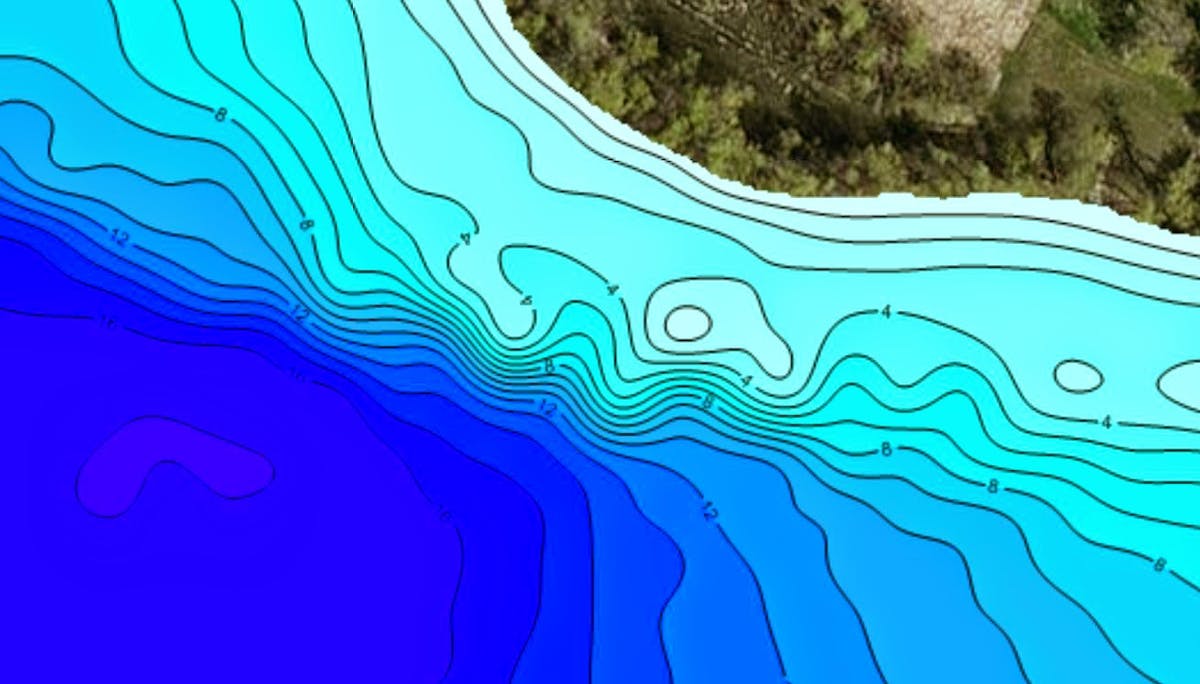 In several trips to the lake over the summer, I had managed to map a good portion of it using Lowrance's Insight Genesis system. Yes, there was an existing lake map on my chip. I soon found out that it was pretty good, but had some glaring omissions. After mapping the areas of the lake that I wanted to target, I found some very key steep breaks that did not show on my map chip.  Wouldn't you know, it was on these spots that we found the mother load of fish! 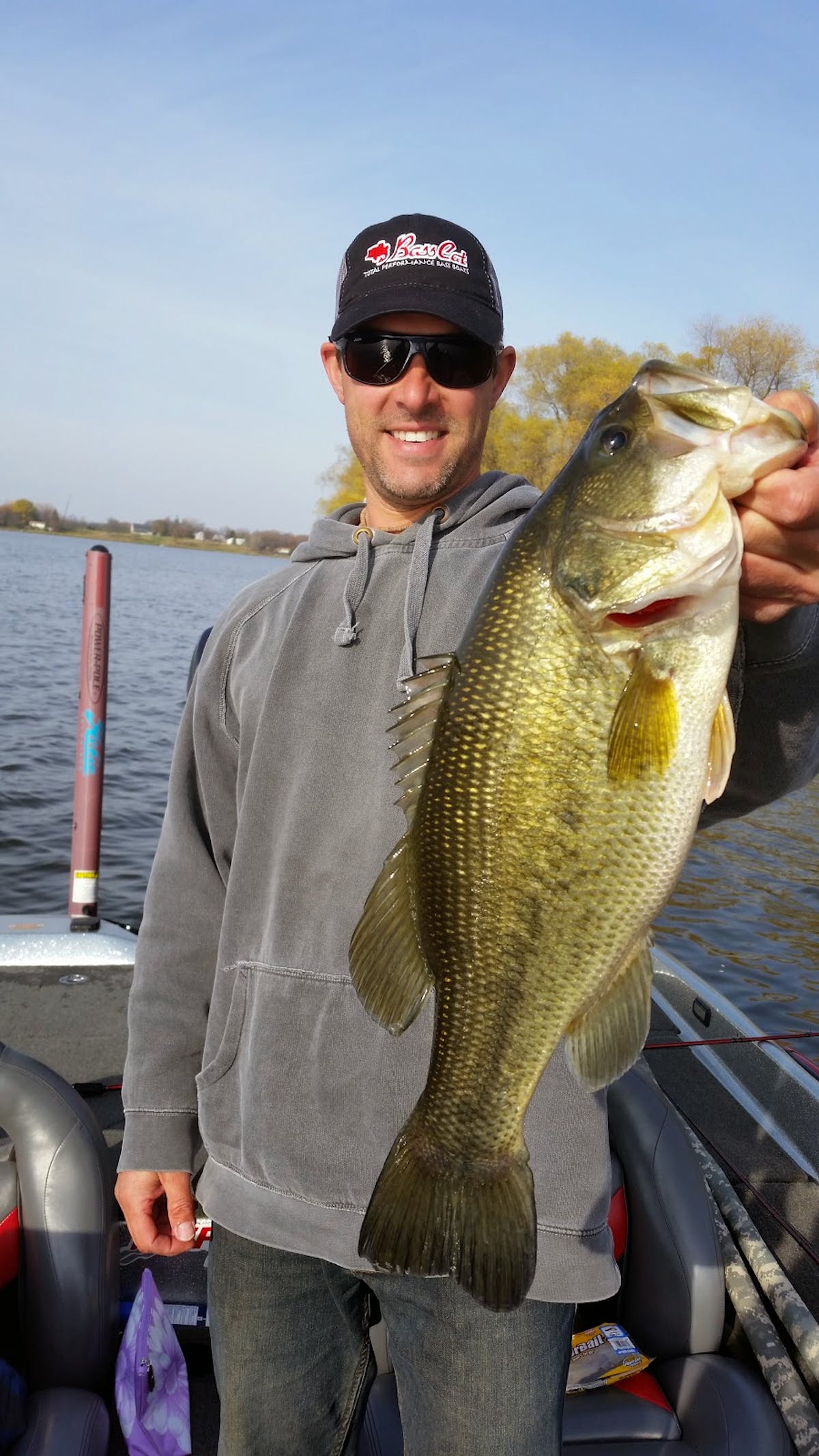 Our approach was simple, slow slow slow. Sure they will hitting moving baits this time of year, and it's a great search method, but we were going to key on a specific break area. A shallow shelf with a rapid drop into 10 feet was calling our name, and for me that means finesse jigs with a craw trailer. A drop I might add, that was not so interesting on my map chip. The standard map showed a pretty typical drop off the shore, while the Insight Genesis map showed a very steep edge with several small points along the break, leading to a larger, more prominent point.

In this case, I found my go to bait was a All-Terrain 3/16 ounce jig, with a rattle, in green pumpkin. What I tipped the bait with depended on the time of day. During the mornings when the water was cold, the fish wanted something with less movement. The go-to bait for these slower periods of time was a Powerbait Chigger Craw. I started with a Chigger Chunk, then as the water warmed the chunk was switched out for the full sized Chigger Craw, giving a slightly larger profile and just a bit more movement as the full size craw has more elongated claws. As the fish moved up onto the shelves, a more active trailer, the BioSpawn Vile Craw, was the preferred choice. 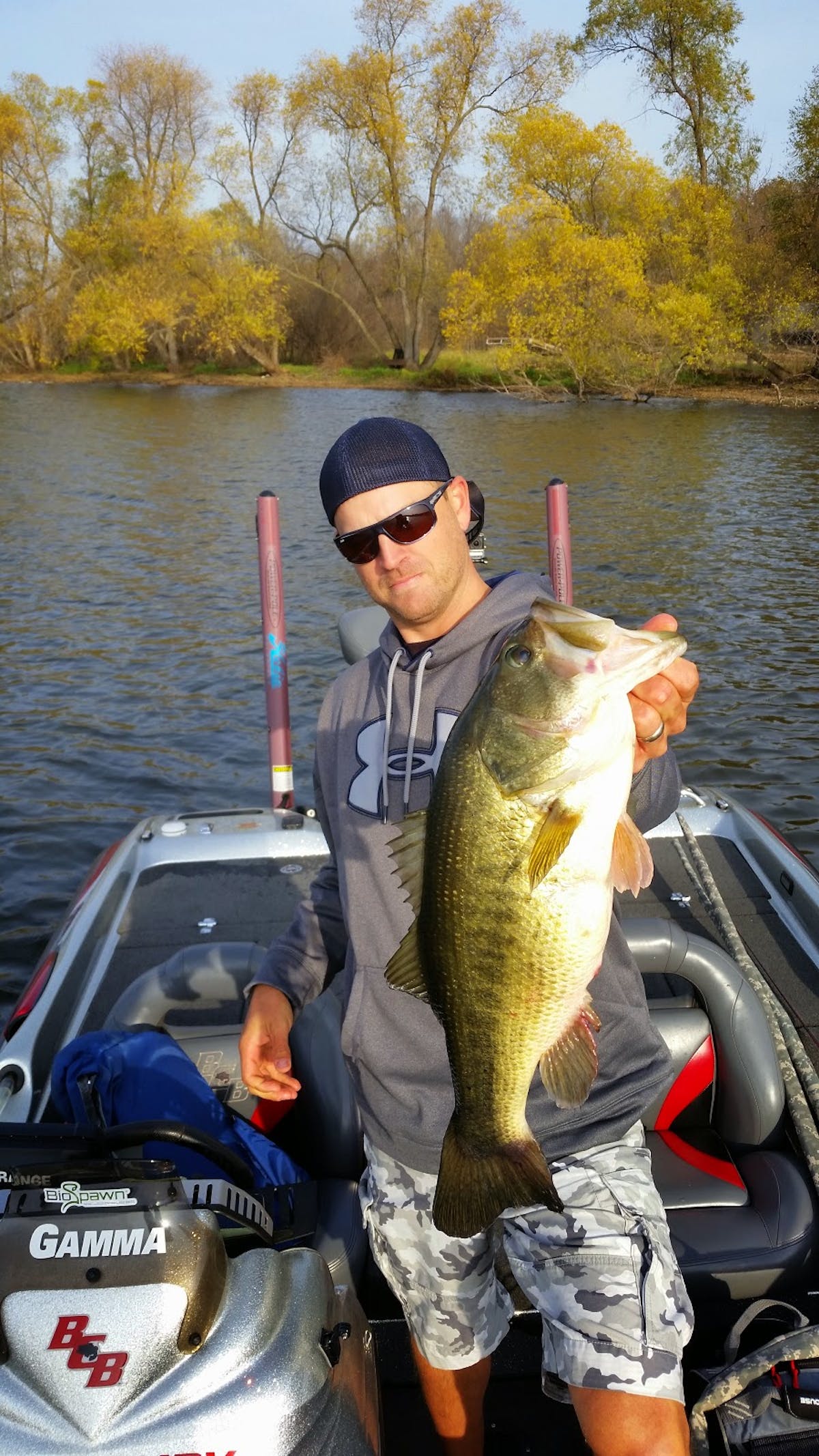 What was amazing on these three trips out was that the quality of fish we were finding was unreal. Everything was big. Four pounders were the average size while fives were not uncommon. The first day out produced one fish over six pounds, the second day saw two fish over six pounds, as did the third day.  Each trip out our best five were pushing 30 pounds!

Each day started the same. Fish were staging off the break in 10-12 feet of water and they did not want to work hard for their morning meal. Bites were consistent, but spread out, as were the fish. The most effective method of presentation was to alternate between letting the jig sit stationary, and then just moving it enough to shake the rattle. As the sun got higher in the sky the bite would pick up, but usually still off of the edges.

Then things got magical. I mean, magically like you read about, but don't really believe. 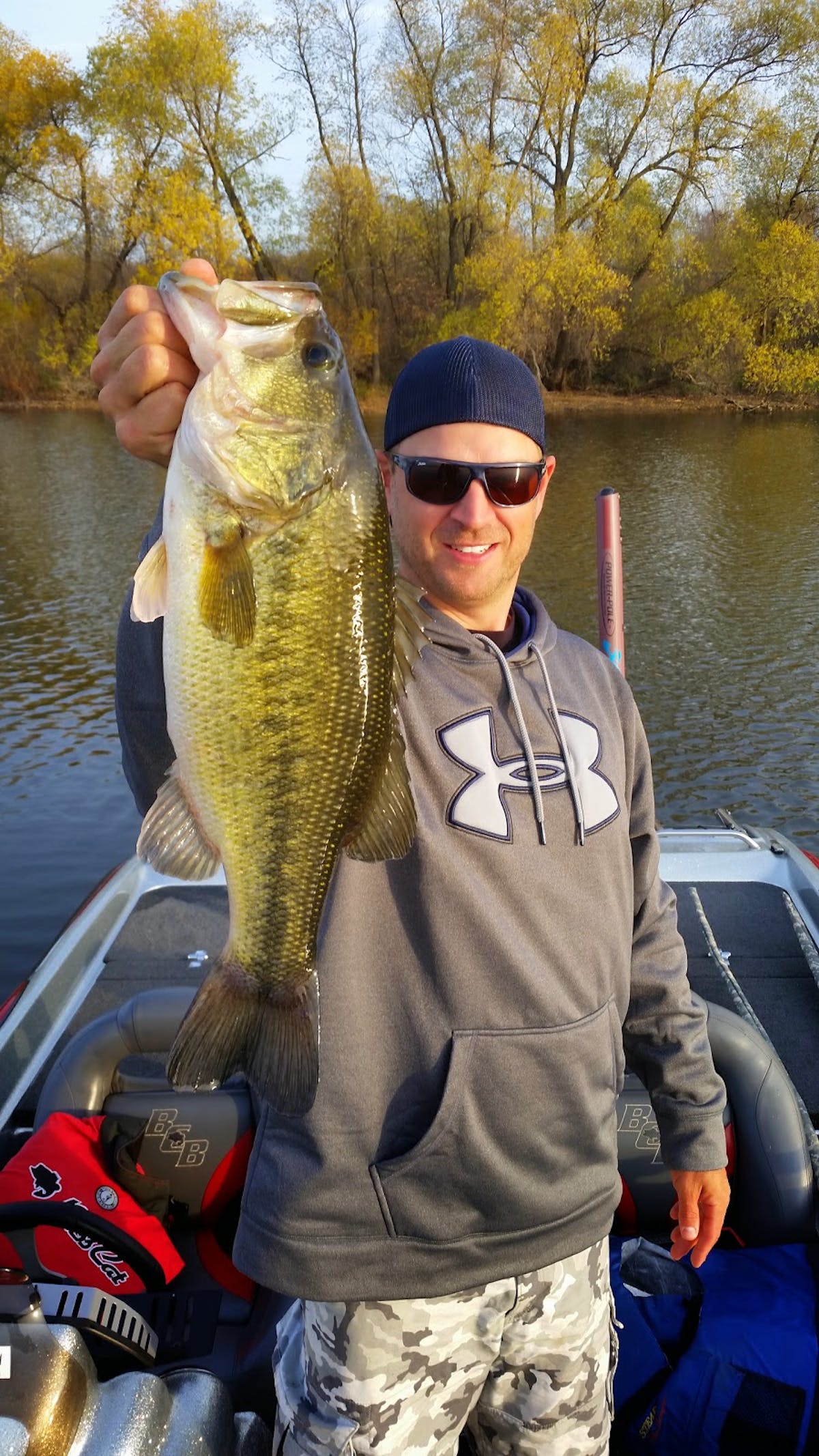 As the sun moved higher in the sky, the fish moved higher onto the ledges. we were able to find the transitions areas with the custom map we had made. We realized that the fish were moving from the steep break line down the shore to a less pronounced edge, then making their way up into the shallower water. We were able to pattern this same movement in two different areas of the lake by finding very similar contour structure.

Once that was dialed in, well, it's hard to put into words.

We caught so many fish, all giants, the we literally lost perspective on what was big. We boat flipped 5 pounders saying "that's a pretty decent one" as we held our fish up for pictures. Our guesses at the weights grew more and more off as the day progressed, consistently under guessing the weight of 5+ pound fish by a pound or more. 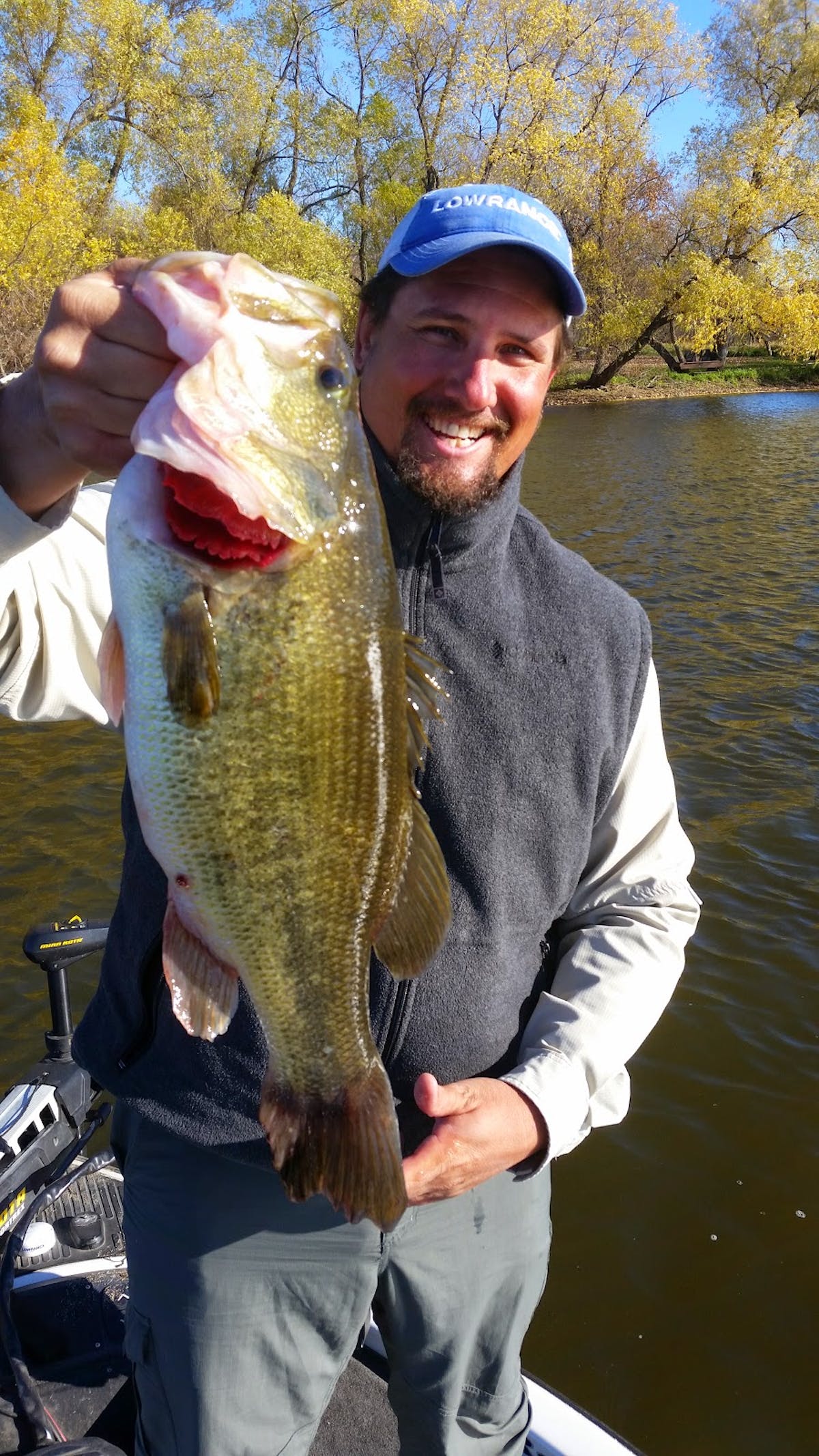 The highlight was taking my good friend, and fishing buddy, Greg Huff, out one of the days. I asked Greg on the way to the lake what his personal best bass was.

"You'll break that today" I told him confidently.

The look on Greg's face when he landed his first 7 pounder was a look I won't soon forget. It was the look of pure joy mixed with disbelief. The holler that came from his throat was the war cry of an angler who just hit the high point of his angling life so far.

It was Bass Utopia, and it is why we do this.

The 6-13 that he followed up with later in the day was another angling highlight for Ol' Mr. Huff, and added to what was a legendary day for both of us.

Here in MN, it's too late for those late fall trips now, but I hope those of you south of the snow line find yourselves some of those same moments that sometimes only late fall can give!